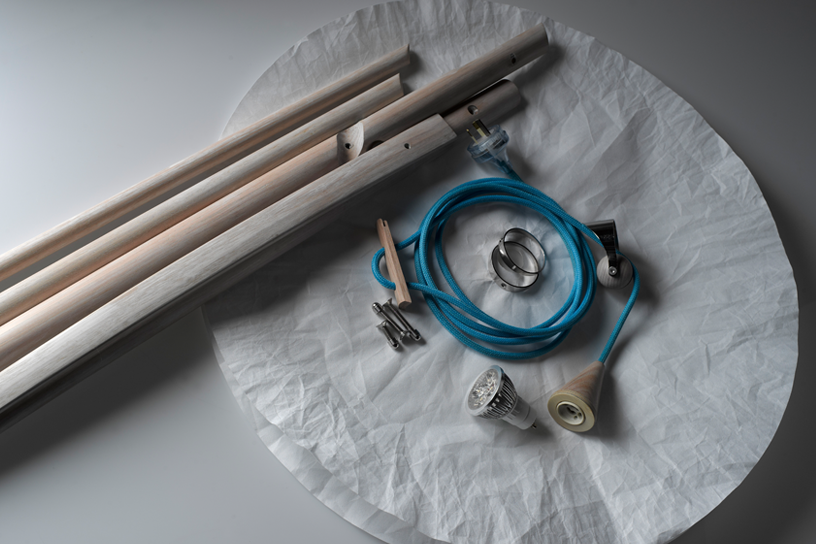 Patrick Senior - The Light Side of Design

Over a two year period, ten Tasmanian designers were invited to work with Paul Morris, creative director of JOIN, as part of the ‘Flat, Stack, Fold’ initiative to address issues of transportation and storage of furniture items in innovative ways.

The project saw a number of significant developments in new product design that have found their way to national markets. The most recent of these to be completed is the ‘Angel Lamp’ by Patrick Senior from Indeco. Almost two years in development, the Angel Lamp will be officially launched at the Design Island 2012 exhibition.

At first, Patrick was reluctant to be part of this new project. Like many of his colleagues, he ran a small business that relied on his sole ability to produce enough goods to keep it turning over. “It’s almost a luxury to sacrifice production time to carry out research and development.”

Rye Dunsmuir, Design Centre’s General Manager, recalls Patrick’s initial reservation but was determined to have Patrick as a participant. “Patrick is regarded by many as one of Tasmania's most gifted designers with work spanning twenty years. We had every confidence that if someone could create a design that would fit the bill, it was Patrick.”

Patrick took up the challenge. It meant a gamble but he realised it was also a way to diversify a business that had remained unchanged for quite some time.

He is not certain why he chose to create a floor lamp, a furniture piece that was something completely different to the timber kitchenware he produced, but the many years spent in design had given the reserved man a highly developed sense of intuition.

The inspiration for the lamp proved to be the easy part. When his eyes fell on the 'angel's fishing rod' plant growing outside his kitchen window, Patrick knew he had the perfect ‘cast’ for his lamp.

Then it was time for the sweat. Patrick and his wife Mieke found sourcing the elements for the lamp impossible in Australia. “If you want something a little outside the norm it seems you have to go overseas. Needless to say freight costs can be substantial.”

Wanting a power cord that would make a statement required Patrick locating red and blue textile cords in Sweden. Lampshade material that would evoke a poppy flower was sourced from Japan. Even the LED lighting necessitated obtaining the socket for the lamp from England.

Listening to Patrick explain the process of creating the tripod for the prototype, you get a sense of a practical man who is not only guided from some inner place but one that has also built up a good sized pot of luck – naturally based on years of experience. “Looking around my workshop, I saw that I had timber dowel of different diameters but not enough of any one diameter. I had already been thinking that dowel of different diameters might look okay. So I tried it and discovered it resolved a few problems in one go. It lightened the weight, made the assembly explanation simple - less confusion about which leg is which - and to top if off, I felt it was aesthetically more pleasing.”

Of course good packaging is vital for market penetration. “We would have liked to have used a 100 diameter tube for packaging. It’s not available in Tasmania in small quantities so we ended making our own.”

The completed product is a lightweight contemporary design that can to be knocked down and dismantled into a small package for ease of transport. It definitely fulfills the brief. Has it been worth it? Rye Dunsmuir thinks so. "While the development process has been lengthy and the investment both from a time and emotional level from Patrick has been significant, I believe the investment will repay ten-fold. The Angel Lamp expresses a level of innovation and grace that will value-add any space and no doubt will find its way into homes the world over.”

It’s said the devil is in the details. Yet a designer may well tell you that it’s in those very same details you’ll find heaven as well. An Angel Lamp must surely help light the way.